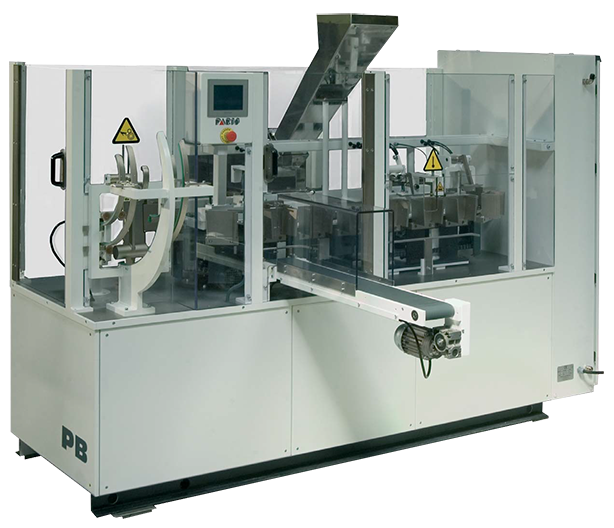 The automatic machine type PB-06 has been designed according to the operation principle of a carousel and is composed basically of three main units, which are the following:

This machine takes the cases from the magazine by means of a suction pad system, which places them into the buckets that erect the case, while leaving the upper side open for its subsequent filling.

Once this process has been carried out, the cases go past the different stations of the carousel, beginning by the filling station, where you can couple any proportioning device. The machine is equipped with a sensing device that detects the lack of case and, in this case, it does not proportion any product.

Immediately after, the filled-up cases or packages are conveyed to the sealing station. This station is equipped with blades that will make the different folds of the case, and then it is sealed by means of guides that hold these folds. As to the type of sealing, we can manufacture different gears or mechanisms (depending on the package) designed to introduce the flange into the corresponding slot.

This sealing mechanism can be completed with a label dispenser. When the packages are ready, they are placed onto a conveyor band, which takes the packages out from the packing machine.

Applications
In the food processing industry, it can be applied to the packaging of chocolates, sweets, biscuits, dried fruits, snacks in general, etc… In the industrial sector, it is best used for D.I.Y. parts, bolts and nuts, accessories, buttons and all types of parts in general, which can be proportioned using the existing means.
Production

The machine PB-06 allows a maximum speed of 40 bags/minute, depending on the proportioner couple to the same, the characteristics of the product, the material and the corresponding packing test.

This machine has been designed, so that any type of proportioner or weigher can be adapted to it, either directly on the machine or laterally, carrying out the feeding of the machine through a lift or other transport systems.

The counters can be equipped with various modules where different products can be placed. This offers the possibility of counting and making combinations of different product units in the same case.

The machine PB-06 has been designed for erecting, filling and sealing cases of different formats with pre-erected bottom. The machine can make various types of case sealing (ask for format sizes and types of sealing)