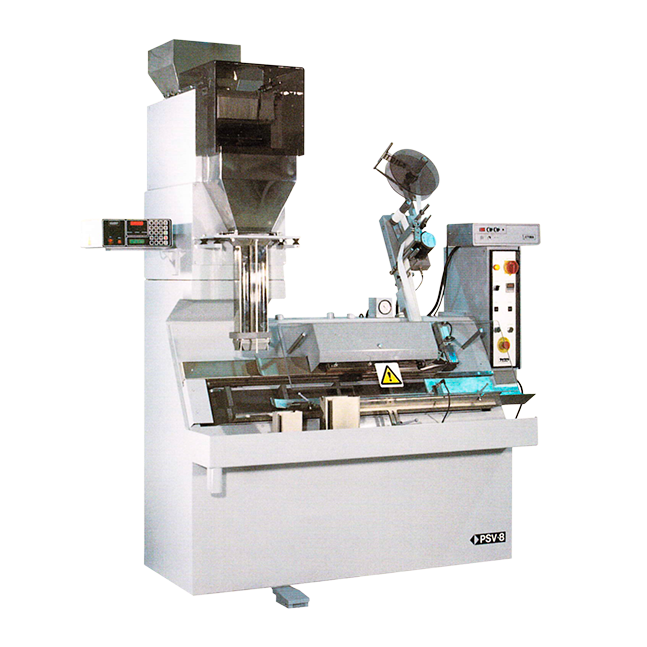 The machine PSV-8 is a monoblock whole composed by an electronical weigher type PS-8 and a bags closer to the vacuum.

The weigher PS-8 E is an especial version for grained and grinded coffe, or others similar products. It´s a simple weigher, completely automatical, of easy weighing regulation and electronical activation.

Machine´s nutrition is made by some vibrators which receive the product from a mill-hopper with two exits, the main deposits the product into a weigher´s bucket, a prefixed amount, while the secondary fills the bucket until the total weighing wished.

When weighing is realized, it´s ready to be discharged to the packet by an especial mill-hopper, vibrated, which avoids the product adherence.

The discharge is realized by a pedal which actives, simultaneosly, the bags closer machine. After the discharge, the weigher begins, automatically, another weighing and so successively.

Weight change and its regulation is realized by some dispositives of easy acces and graduation.

The maximum production of this machines is 15 weighings minute, according to the volume to realize.

Description of the bags closer to the vacuum

Bags closer machine to the vacuum is a machine which can be adapted to all the bags sizes that exist, between the capacity of 100 gr. to 1.000 gr. of grind coffee, cause of its base guide of regulating height.

When bag is full, it´s placed, manually, over a compartmented ribbon, which, cyclically, introduces the bags into the vacuum and soldering station.

Vacuum degree and soldering time are spontaneously regulated by some temporizers.

Production of the bags closer to the vacuum

The machine´s production can change according to the speed in bags filling with the weigher, which really marks the whole rhythm. The maximum of this machine is 10 cycles/minute.